Collectd is already grabbing statistics from my services and drop them into InfluxDB so that I can get pretty graphes with Grafana. One thing I miss is a single page that shows the overall status for all those systems ; somehow also known as Status Page.

Each servers have a collectd instance running. Collectd checks if some processes are running, alert me when it’s not the case and write the test results into InfluxDB.

I use a simple test : if a process is running, then the service is considered UP. There are many cases when this is wrong. But I’ve run Monit this way for ages and it covers 99% of the needs. Later on, I’ll see how to run tests that include protocol dialog and response time in the status page.

I use the collectd “processes” plugin to get statistics about cared daemons and the “exec” and “threshold” plugins to get email and SMS notifications.

At the time of writing, my OpenBSD and Linux machines ship with collectd 5.8.1. Other versions might not work as described.

The daemons are monitored using the “processes” plugin:

This will gather informations such as number of matching instances, process state and ressource usage. Full description is available in collectd.conf(5).

Using the “threshold” plugin, collectd will react when the gathered values are out of range and raise an alert. See collectd-threshold(5) for more informations.

As soon as collectd will not find at least one instance of a process, it will raise a Failure error. I don’t want to be flooded with notifications so I only get one when a status changes : one for failure, one for recovery.

Notifications are achieved using the “exec” plugin. Read about it in collectd-exec(5). The “NotificationExec” primitive defines scripts that will be executed when collectd raises an alert.

The script itself has to decide if it does something or not depending on the context and information it gets. In my case, I parse the data provided by collectd to extract criticity, process name, etc. Then an email is built and sent. Finally, an SMS is built and sent too.

Once (re)started, collectd(1) will now monitor the daemons and hopefully send me a notification should they die or recover.

My collectd instances send data to a remote InfluxDB instance using the “network” plugin. The configuration was described here so I won’t cover it. I’ve added encryption and authentication since then but the overall configuration is still the same. There are a few “processes_*” measurements created by collect. To achieve the Status Page, I only use processes_processes which looks like this:

This means that one could also raise an alert if the process number gets to high or too low. In my case, I only deal with “ps_count” being 0 or not.

The Grafana dashboard allows a global view on received metrics. Variables are configured to be able to select a limited number or host or services. I only have a few machines but I expect the detailed view to be quite messy when 1000 monitored servers are rendered. 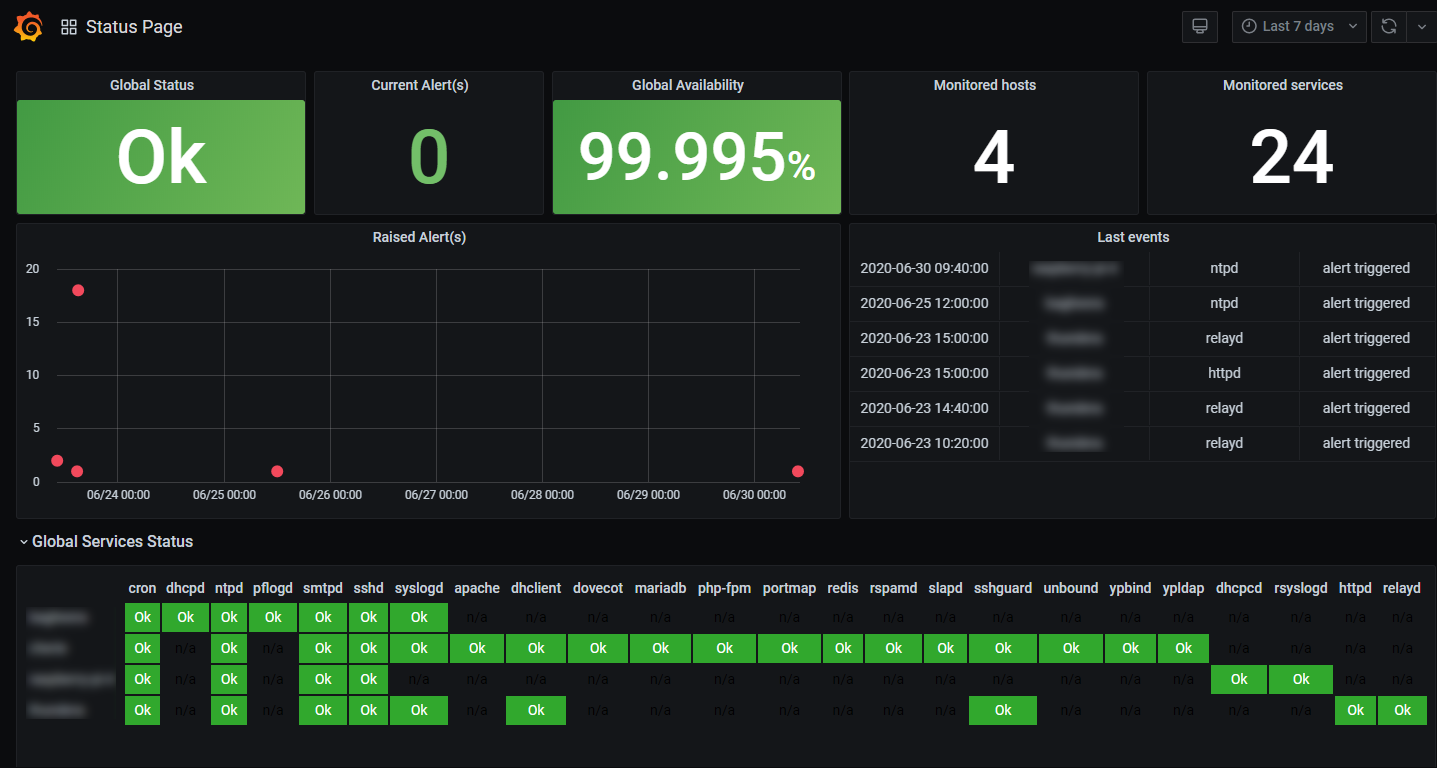 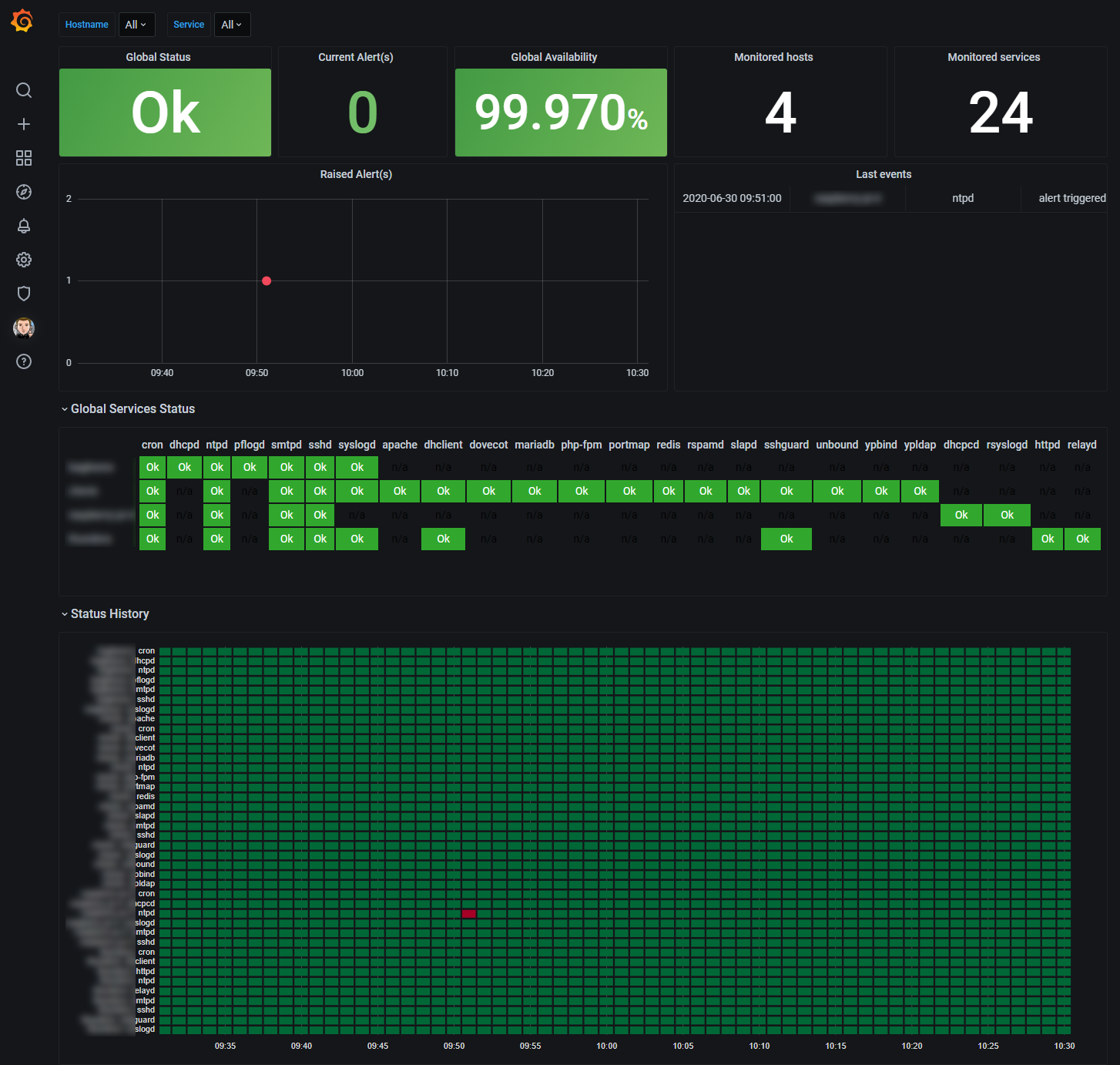 The dashboard is available on Grafana Labs dashboard section .

So far, it seems to work pretty well. Collectd sends notifications when things go wrong ; I’ve added thresholds for CPU load too. I kept Monit running for a while just to compare and they both send the notifications when it was needed. I can now turn it off.

During my testings I faced two problems. Because of networking issues, collectd was unable to reach InfluxDB. It was still able to send notifications though. So only the Status Page was impacted. The second issue I got once was collectd silently died on a server. Neither notification nor Status Page updates were available until I noticed it looking at the statusmap panel.

Both issues could be detected using Grafana alerting feature. It should be configured to send a notification if data are suddenly not available. As for now, I couldn’t achieve a proper way to implement it. Got to work on it…