OpenBSD 6.5 advertises for an installer improvement: rdsetroot(8) (a build-time tool) is now available for general use. Used in combination with autoinstall.8 , it is now really easy to do automatic upgrades of your OpenBSD instances.

I first manually upgraded my OpenBSD sandbox to 6.5. Once that was done, I could use the stock rdsetroot(8) tool. The plan is quite simple: write an unattended installation response file, insert it to a bsd.rd 6.5 installation image and reboot my other OpenBSD instances using that image.

Mount the “live environnement” image from the ramdisk kernel:

Create and put the response file in the disk image:

Make sure the “root disk” information is correct regarding your instance installation. The easy way is to check using “mount” on the target server.

Save the changes and apply the modifications to the ramdisk kernel:

Transfer the bsd.rd image to the instance that should be upgraded and boot it:

The host will reboot and the console should display something like: 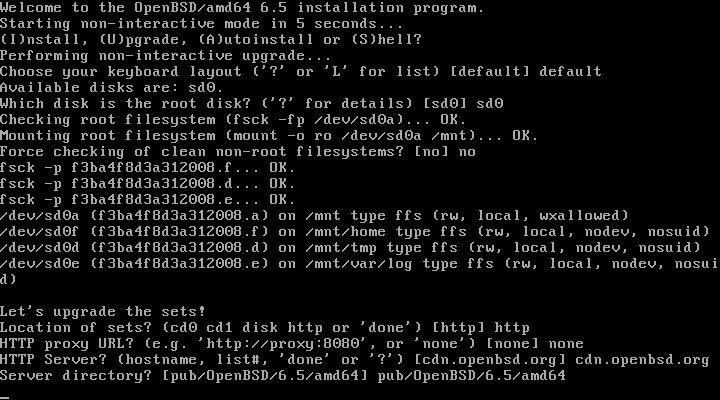 The upgraded host will reboot and you hopefully will get SSH access back to it. Checking your email, you should get an “upgrade log” and an “rc.sysmerge output” messages. This will help ensuring everything went ok.

You should also get an “upgrade response file” by email. This can be used to… create the response file we previously used. This is pretty usefull to issue a manual upgrade on host A and replay the scenario on similar hosts B to Z using autoinstall.

There must be a way to run onetime commands (in the manner of fw_update) to automatically run sysmerge and packages upgrades. As for now, I’d rather do it manually:

I just read that florian@ has released the sysupgrade(8) utility which should be released with OpenBSD 6.6. That will make upgrades even easier! Until then, happy upgrading.